The Passing Of An Unsung Hero 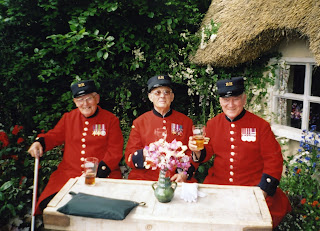 (Jim Townsend on left of photo, my CP friend Grandad P on right)
I learned this evening of the passing of a 95-year-old Chelsea Pensioner.  Jim Townsend was a modest, quiet and unassuming gentleman.  He had a twinkle in his eye and a ready smile.  Jim had been captured by the Japanese after the fall of Singapore in 1941 and sent up to the infamous Railway of Death ~ the railway between Burma and Siam (now Thailand).  He always claimed that he survived because he was 'lucky' enough not to contract Cholera and Malaria at the same time.  As a boy, Jim had wanted to go to Art School, but his father said that it was no place for a man and sent him out to work instead.  Jim didn't paint again until he joined the Royal Hospital; my nephew is the lucky recipient of Jim's painting of Elgin Cathedral.  Jim's story was partially told in the episode 'New Boys' of the BBC's series Once A Soldier. 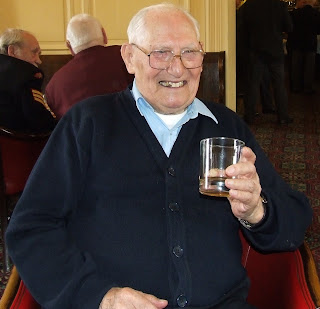 A lovely tribute, Ruth. Thanks for sharing. xo

He really was a lovley man and we'll think of him everytime we look at his painting.

Sorry for the loss of your friend, this is a lovely tribute Ruth....Hugs

Oh, I'm sorry to hear this Ruth xx This is such a lovely tribute to him though.