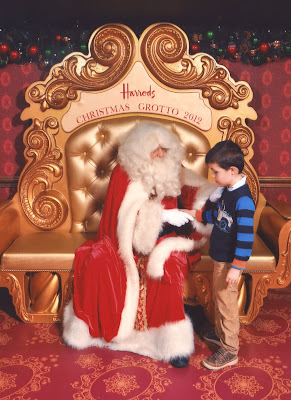 I took The Boy Child to see Santa today.
He hasn't seen Santa at Harrods since his first Christmas.
The change in the whole Santa set-up there is nothing short of remarkable.
It was good before, now it's out of this world.
Santa took the time to engage with The Boy Child, holding his hand as he talked to him, telling him that asking for Lego was a good choice because it "encourages creativity". 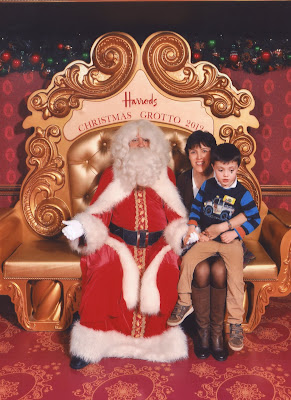 ~ glitter on TBC's face?  How did that happen? ~
I look at these photos and I want to cry.
Coping with The Boy Child's autism is hard.
I hate that autism makes it almost impossible for The Boy Child to look at someone directly in the face.
Today, Santa made autism disappear.

"Though I've grown old, the bell still rings for me as it does for all who truly believe."
Posted by Ruth at December 08, 2012

Oh, Ruth. I'm still concentrating on reading blogs but not commenting at the moment, but I couldn't let this post go by. I have tears in my eyes. Beautiful photos, beautiful story xx

Awww these are such awesome pictures. I'd love to see Harrod's at Christmas time.

I got your card with TBC's artwork on the cover - you've got a talented artist on your hands! Like mother, like son! <3

I can only say this post has made me both smile. I am so glad that The Boy Child could relate to Santa and that is what the magic of Christmas is all about.

What a beautiful photo!

WTG Santa! That first picture is priceless Ruth...and I still hear the bell as well!
Much love
Alison xx

It's a great picture. The fact that TBC isn't looking directly at Santa in no way detracts from that. So glad Santa did the right thing - thus for a short time answering your wish too

Wow - TBC is getting tall! Both he and Robyn's oldest son seem to have grown several inches this year!

I love seeing you both with Santa, and I know that TBC's autism makes things a bit challenging at times. If it's any consolation to you, I think many children who don't have autism have a hard time looking adults in the eye. I'm glad to know he "connected" with Santa! :o)

I bleive inSanta and this just proves it!

Love to you, my sweet friend.

Oh how lovely - what a nice man that Santa is. Glad the visit went well and that they connected - they're holding hands too.