As I was attempting to empty my ironing basket earlier today, I was listening to a piece on the radio about books that people find almost impossible to read.
And that got me thinking.
We bloggers often mention books we love and books that have been recommended to us by others.
But what of those we found hard going?
Those that were as dull as dishwater?
Those where we decided that we simply didn't like the character(s)/author and really didn't care what happened to them?
A quick browse of our shelves offered a number of books abandoned by me in recent months. 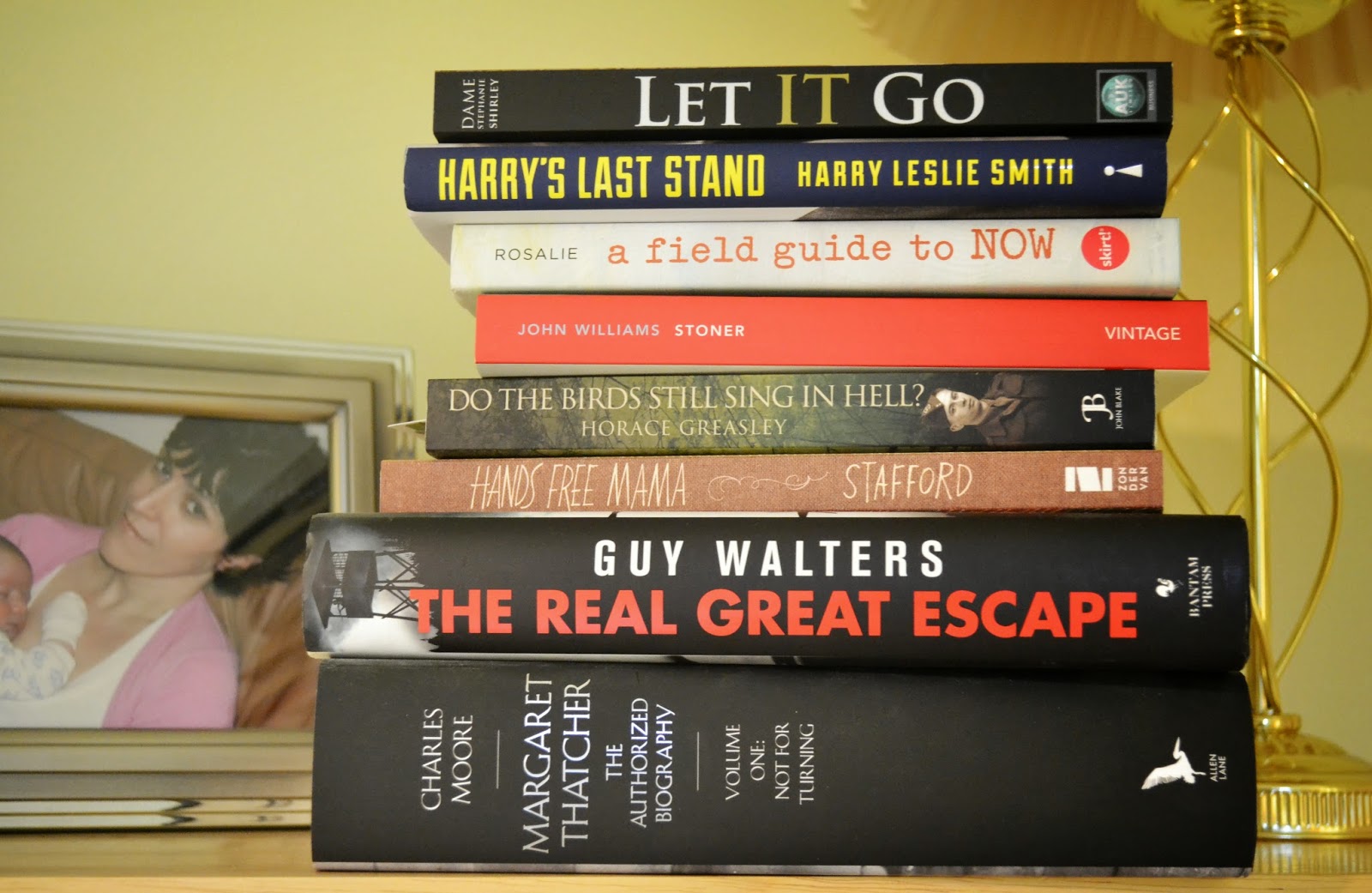 Let it Go by Dame Stephanie Shirley | A gift from my SiL.  Dame Stephanie is one of the UK's biggest philanthropists.  She also had a son with Autism.  Who died.  No need to wonder why this was abandoned.
Harry's Last Stand: How the World My Generation Built is Falling Down, and What We Can Do to Save it by Harry Leslie Smith | I received this a birthday gift and honestly thought I would enjoy it.  I was wrong.  The first few chapters appeared to be nothing more than a rant about Society in the 21st Century and the Youth of Today.
A Field Guide to Now by Christina Rosalie | I mentioned this first in January, when I wrote  "A Field Guide to Now was flagged up on Ali's website.  I gave it as shot, as it sounded interesting, but it turned out to be one of those books that anyone of us could have written, if we'd had the foresight to have the idea in the first place."
Stoner by John Williams | I was seduced by Waterstone's claiming it was their Book of the Year.  It was awful, awful, awful and I can imagine it as a set book for GCSE when the syllabus compiler believes he is being ironic.
Do The Birds Still Sing in Hell? by Horace Greasley | Horace came across as a truly horrible young man, with no regard for others.  I didn't like him one bit.
Hands Free Mama by Rachel Macy Stafford | Again, first mentioned back in January. It became very repetitive and I became resentful of how she portayed how her life and that of her family became so much more wonderful.
The Real Great Escape by Guy Walters. I probably read this too soon after the biography of Roger Bushell. Two books very similar; they had to be.  And I was disappointed to realise that I didn't like Roger Bushell.
Margaret Thatcher: The Authorised Biography by Charles Moore.  I bit off more than I could chew with this one.  Plain and simple.

How about you?  Which books have you abandoned recently?
Leave a comment telling which titles left you cold.  We're bound to get someone who says, "Oh, but I loved that!"
This link refers to the original article about books abandoned mid-read.
Posted by Ruth at July 08, 2014

I really enjoyed this post! Honestly I think you could write a newspaper column on "books I didn't love". You could be the anti hero of the book reviewing world.

Books I have abandoned recently? Mm..trying to think. One book I've never been able to get through is Catch22, which I know lots of people love

like Sian I really enjoyed this post. It's refreshing to hear about books stuck on rather than just recommendations! I never got into the book "once". I really did not like the two main characters and couldn't really care what happened to them! It was a shame because it was a book I was sure I would enjoy!

Good to see some honesty, especially about books that we are told are a 'must read'
Maybe I should look carefully at the books on my shelf!

Oh my goodness, how long have you got? My not-liked list would be twice as long as my liked one. I think I must be getting very nitpicky. I have never seen able to read War and Peace for a start. I hate Wuthering Heights. And anything that spells a long time describing a battle.

I pretty much never abandon a book unfinished, although sometimes I have to read something else as a break and then come back to complete it

There was a series of fantasy books about a character called Thomas Covenant. I tried several times to read them and the furthest I got was chapter three, book one. The last time I tried I made Mr M roar laughing when I threw the book to the floor and shouted "Oh just Fcuk off and die you moaning bustard!" or words to that effect. I then erased the titles of the books and the author from my memory. I was also unable to complete Catch 22 and I found Lady Chatterley's Lover a complete waste of time as D H Lawrence spent far too much time describing the forest and the surroundings and there was NO PLOT. I used to have little feelings of guilt about not finishing a book. Now I realise that quitting as soon as it gets tedious gives me the chance to read something good a bit sooner.

What a great post! I only finish about half the book group books! LOL! I'm trying to be better about either finishing or admitting it's not going to happen this year. Never finished Unforgiven and may or may not get through Life after Life.
Rinda