It was only after we'd settled on the first Saturday in December for our annual Non-Christmas Christmas Drinks Party, I realised it was the 3rd.
Saturday would have been Mum's 73rd birthday.
So, we talked about it and talked about it some more.
We decided to go ahead, as Mum would have been the first to say that not doing something nice
on the anniversary of something painful was just plain silly. 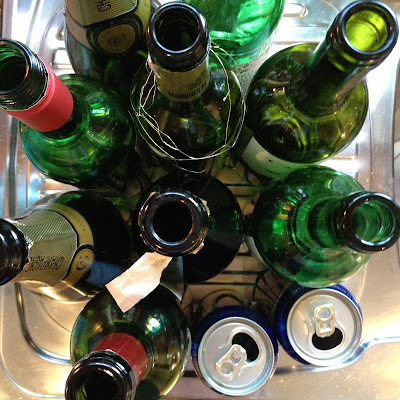 We call it the Non-Christmas Christmas Drinks Party because,
as our friends are a mix of different cultures and faith, it makes sense.
There was plenty of alcohol, plenty of tea and coffee, plenty of soft drinks.
We had finger food.
And dessert.  Plenty of dessert.
Of which, only the alcoholic empties were photographed.
Before the majority of our friends arrived,
the three of us took a moment to toast Mum.
And that was enough.
Posted by Ruth at December 05, 2016

It sounds like you had fun after properly toasting your Mom.

It's certainly difficult negotiating anniversaries and celebrations, this I know only too well. But it sounds as if you coped with grace x

Looks like there may have been a few merry people there.
Briony
x

Your Mum was a wise woman. I know at this time of year with so many celebrations, it is hard to explain to people why some days are difficult to be cheery as I mark the anniversary of losing my Mom at this time of year. We will be attending a not a Christmas Party, Party later in the month & only because the person hosting does not like the pressure of trying to be ready for Christmas - what ever! (col).