More years ago than I can remember, Mum gave me a painting that had always hung on a wall
somewhere in whichever house we were living in at the time.
It wasn't anything spectacular; a street scene of a church and a few cottages.
It was also filthy dirty and had a large water stain.
The frame was very, very ugly. 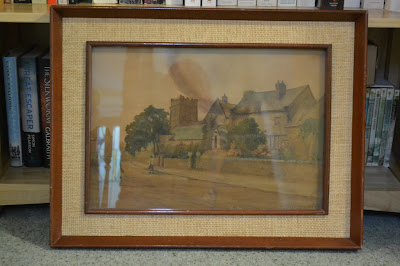 Mum and Dad had been given the painting when they got married in 1963,
by an elderly neighbour of my paternal grandparents.  I'm pretty sure
that the neighbour had literally taken it off her wall in order to gift it to the newly weds. 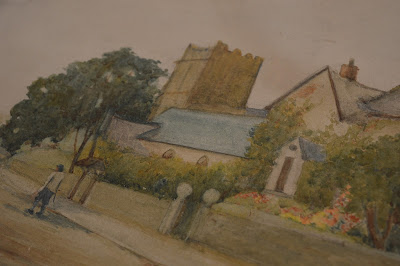 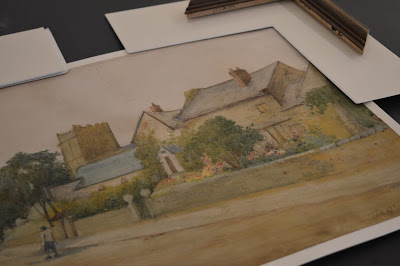 The water stain occurred during a typhoon when we lived in Hong Kong.
We lived in a flat on the top floor of a block and I believe that the ceiling chose
to spring a leak during the storm.
The painting lived behind our bedroom door, propped up against the wall and forgotten for ten years.
Every now and then, I would see it and say to The Brainy One,
"we really should do something with that painting ..." 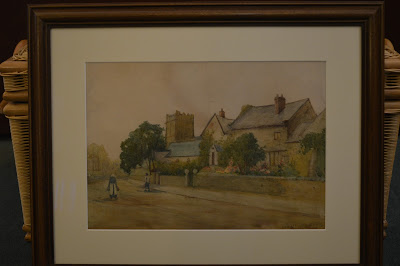 In October last year, it finally went for restoration, a job that took around two months.
I like the fact that the water mark is still slightly visible.
I had planned to keep the restoration and re-framing as a surprise for Mum until both were complete,
but I ended up showing her photos I'd taken after the restoration and I'm so glad that I did. 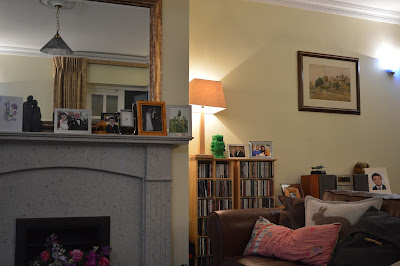 The painting is now on the wall in our living room, in a spot that I can see from the sofa.
There's so much of my history tied up in that painting,
that I can't help but smile every time I look at it.

It is amazing how a good frame & matting can enhance a photo, a painting, a sketch, especially for something so personally linked to your history.

What a lovely thing to have

It looks fantastic now. That lady, it seems, has always been carry bags!!

How lovely! What a super thing to have done, Ruth, and it must be wonderful to have something with so many special memories and connections catching your eye.