Autism and the Everyday #8

There are some things about autism that are hard to live with.
It's all relative because, let's be honest, autism is hard to live with.
Full stop.
Let's talk chewing.
Now, I know that babies and toddlers chew things;
it's how they learn.
Children with autism, however, chew for much longer. 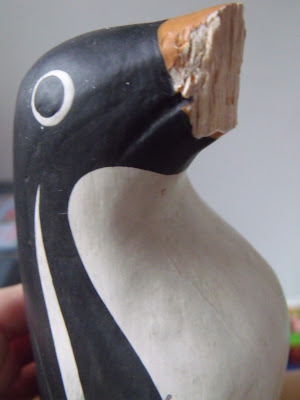 Repetitive behaviours help a child with autism.  It’s common to see children with autism who have wet shirts. Biting or chewing on toys or other objects such as pencils is also well known in the autism community. Often, easing the anxieties by chewing or biting helps ward off meltdowns that are a result of too much tension or insecurities. 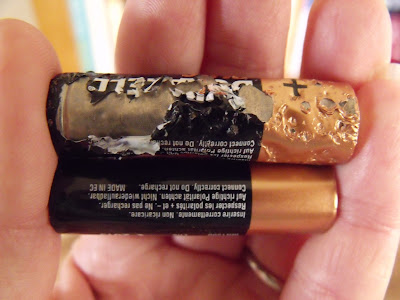 A major problem that a child on the autism spectrum may have is with proper sensory processing. As the brain receives information from the senses, it sends the wrong messages to the rest of the body. A child who bites, chews or sucks on non-edible objects may be feeding a deep, oral desire. It may feel as if he cannot satisfy the need, causing him to continuously have something in his mouth.
But as the child grows, how best to manage it?
{Because let's be honest here, I'm fed up with having to darn the chewed cuffs of jumpers,
and of trying to persuade him that chewing the silica nose-pieces on his glasses is not a good idea.}
We invested in a ChewBuddy, which we are encouraging
The Boy Child to use when he feels the urge to chew on something.
It appears to be doing the trick, as he hasn't chewed his glasses in weeks. 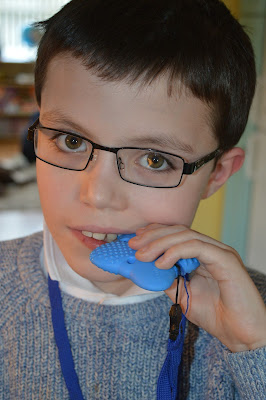 It certainly looks as though it's taken some punishment. 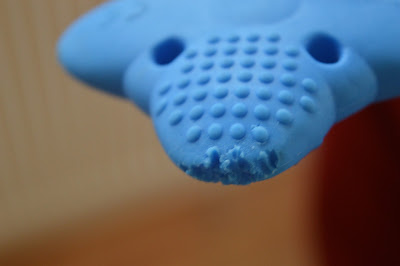 And just to be on the safe side, we are in the process of changing The Boy Child's glasses
for a pair with a moulded bridge.  Because, you know, I'd hate for him to end up in hospital with a blocked intestine and we be investigated for Munchausen by Proxy ...
Posted by Ruth at March 10, 2016

Email ThisBlogThis!Share to TwitterShare to FacebookShare to Pinterest
Labels: Autism

Fiona@Staring at the Sea said...

I always used to say it was worse than having a puppy! It was either cuffs or the neck of his top. The top edge of the duvet being another favourite. Rarely anything hard. The batteries are quite alarming. The Chewbuddy looks like a great solution. These days my boy is more of a fiddler than a chewer.

Batteries?! I like the look of that chewbuddy. It reminds me that when I was cutting wisdom teeth at university J suggested I chew on the top for a hot water bottle, which worked!

The look of those batteries is seriously scary ... A chew buddy sounds an excellent thing. I remember when my children were teething, my Mum used to give them the leather strap of her handbag to gnaw on. I admire your fortitude, Ruth.

Batteries?! Oh my goodness. Sounds like you found that chew buddy just in time.

Never heard of the ChewBuddy but it looks like a great idea. These days my ds is into chewing gum or nails, or fiddling (he opens/closes/snaps the bag closers from IKEA). But we went through more cuffs and collars than I want to think about.