In 1993, my parents' oldest friend (as in years known, not actual age)
made them a quilt for their 30th wedding anniversary.
That was the year that my sister and I threw them a surprise party. 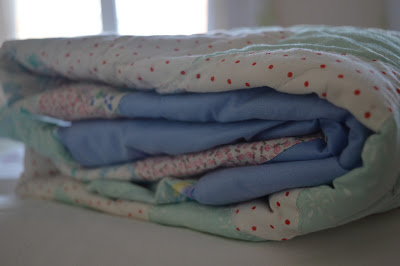 When we stayed at Mum's the night before her funeral,
I saw it on the bed in the spare room. 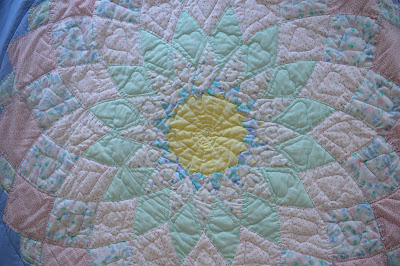 My friend-who's-like-my-brother was sleeping in that room.
It's his mum who was my parents' oldest friend. 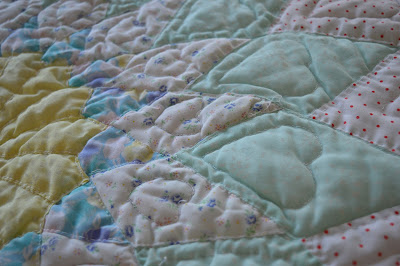 I looked at it and thought, "I'm taking that home." 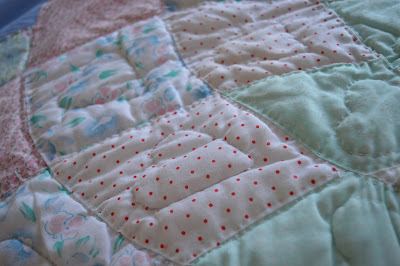 Every piece was stitched by hand,
and there's a hidden personal touch. 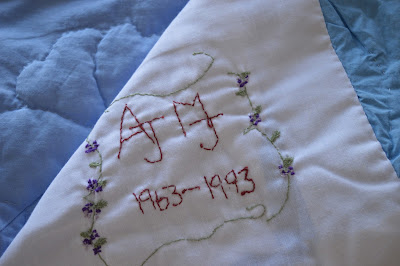 In the early part of 2014, I made a quilt square for the lovely Deb.
I think she is currently piecing together all the squares she received.
That was the sum total of my quilting career.
But now I have a handmade one on the end of my spare bed.

{Confession: Auntie S, the mum of my friend-who's-like-my-brother, made me a quilt for my 30th birthday.  It's bottle green and lime green.  The lime green used to be cream until it went into the washing machine.  I never really liked it {I've never publicly admitted that before, gulp}.  Where is it now?  In the back of our car, where it is used as a blanket for the pooch.
Happily, he loves it!}
Posted by Ruth at March 01, 2016

That really WAS a labour of love...and quite a public confession! Xx

Oh I can't even tell you how much I love this, Ruth. And it makes me even more excited to complete the friendship quilt we started in 2014. I am so honored to have squares made by your sister, your mom, and you. What an amazing keepsake you have there! ♥

Beautiful quilt - what a keepsake to treasure. The quilt is right where it should be.